THE LOOMING THREAT OF EVICTION UNDER THE GUISE OF CONSERVATION 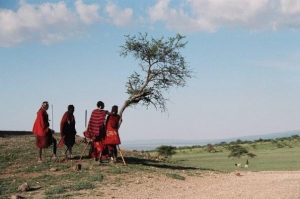 Climate change, environmental destruction and pandemics affect all of us.  We know, however, that the poor and vulnerable bear a disproportionate burden of these issues.  Conservation of precious environments and wildlife is a critical factor in overall global health, but it is important to recognize that achieving these goals can disrupt and displace the indigenous people who have lived in those areas for centuries.  The nonprofit Oakland Institute is dedicated to addressing the complexities of economic development, preservation, human rights in underserved populations around the world. Their activities are focused on giving a voice to the unheard. Please join us for this timely and important topic when we host the leadership of The Oakland Institute for our first Distinguished Speaker Series.

Anuradha Mittal, founder and executive director of the Oakland Institute, is an internationally renowned expert on development, human rights, and agriculture issues. Recipient of several awards, Anuradha Mittal was named the Most Valuable Thinker by the Nation magazine.

Since 2008, under Anuradha’s leadership, the Institute has unveiled land investment deals in the developing world which reveal a disturbing pattern of a lack of transparency, fairness, and accountability. The dynamic relationship between research, advocacy, and international media coverage has resulted in an amazing string of successes and organizing in the US and abroad.

Mittal has authored and edited numerous books and reports. Her articles and opinion pieces have been published in widely circulated newspapers including the Los Angeles Times, the New York Times, Chicago Tribune, Bangkok Post, Houston Chronicle, and the Nation. Anuradha has addressed the US Congress, the United Nations, given several hundred keynote addresses including invitational events from governments and universities, and has been interviewed on CNN, BBC World, CBC, ABC, Al Jazeera, National Public Radio, and Voice of America.

He holds a Master’s Degree in Public Policy from the UCLA Luskin School of Public Affairs with a concentration in Global Environment and Resources. Andy’s past research experience centers on evaluating strategies for developing countries to adapt to the impacts of climate change with a focus on agroecology and sustainable seed systems.

Before his Master’s, Andy spent multiple summers working in Malawi on a variety of youth, health, and agriculture projects in addition to working at the USAID Bureau of Food Security Service Center and interning at Landesa. He graduated with honors from Colby College in 2016, double majoring in Government and Environmental Policy.

ATTENDANCE IS LIMITED. THIS IS A FREE EVENT, BUT REGISTRATION IS REQUIRED.