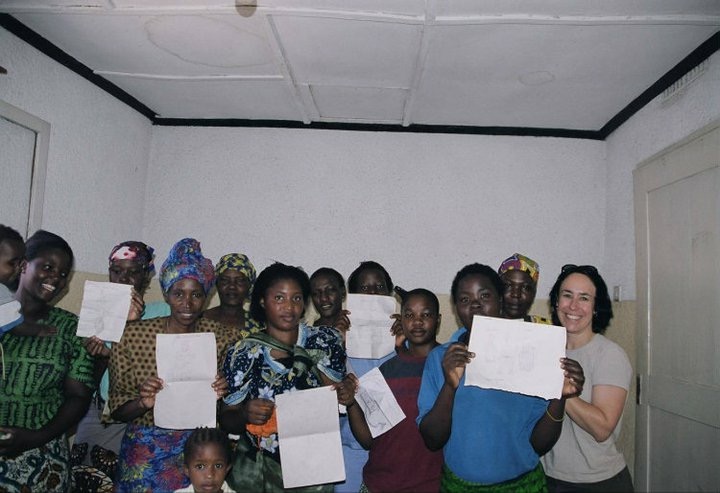 Today marked the first official meeting of the Tumaini Group (Swahili for “Hope”). This will be a group of women either infected with or affected by HIV/AIDS who hope to come together regularly at the Upone Clinic to share with each other, and to go out in the community to educated others and invite them into their group.

How this group happened to come together was the part I wanted to share, especially with the Grupo Esperanza – a support group for HIV+ Spanish speaking women at  AIDS Service Center in Pasadena – whose pictures and stories were the inspiration for their sisters in Tanzania. On Monday, our first morning at Upone, several women and their children were at the clinic for the weekly maternal child clinic. Ann Kleeger, LCSW,  and I were in the process of creating a board in the hallway where the patients wait with the pictures from the Grupo Esperanza and their stories. We also asked Simon, the guard at the clinic, to make a sign in Swahili explaining what the pictures and stories were about. AS the day went on, several of the women looked at the pictures and asked about the people in them. We and our interpreters explained that these were women in the United States who were living with HIV and hoped to reach out to their sisters in Africa. At the end of the day, I was approached by 5 women saying that they, too, wanted to start a support group, stating that they wanted to come together as the women in the U.S. had. We agreed that we would have a meeting on Friday morning (today), to talk about their plans. I gave them cameras and asked them to bring them back to me with stories to bring home with me to my group.

So, this morning, after much confusion about who was at the clinic for what (everything that we think is so difficult at AIDS Service Center and the Phil Simon Clinic is exponentially difficult when you don’t speak the language!). These 5 women, and 8 of their friends came to me armed with their cameras, drawings of their lives with HIV, and a formal plan for the group they would like to form.

For some reason (those of you at ASC who are trying to start new support groups will relate!) I didn’t think any of them would show up, so I was really surprised when they did, and in such large numbers! They explained their pictures to me. I was just overcome with emotion. I told them asante sana (thank you very much) for returning, and for working so hard during the week to create their group. They shared their pictures and stories with me, and I cried (which I seem to be doing a lot of over here! must be the altitude or something!). They were very concerned, and I explained through Tito, my translator, that my tears were happy tears, not sad ones. They all laughed and one women said to me in English, “Don’t cry, Teacher.”

I wanted to share this story especially for the women of Groupo Esperanza at ASC. Please know what a difference you have made in the lives of these women in Tanzania. As I began writing this entry, I said to Rhonda, Ryan, and Lesikar (our driver and honorary social worker) that I just realized that the name the the Tananian women chose for their group – Tumaini Group – means the same in Swahili as Grupo Esperanza does in Spanish. Cool!